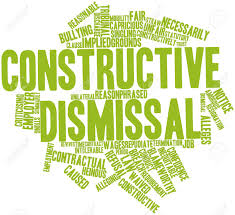 When it comes to the question of what is called “constructive dismissal” there is a certain amount of confusion as what it means. Technically, constructive dismissal is when an employee resigns from a company because the employer’s actions in relation to her or to him amounted to a breach of the employment contract. This often used to be described as actions that are so unreasonable that no employee could reasonably be expected to accept them. This gave rise to what the UK Court of Appeal described as “leading to the finding of constructive dismissal on the most whimsical grounds”. There have been various examples throughout the Caribbean. One Trinidad and Tobago example was an employee who stole six bottles of alcohol from his employer, but claimed constructive dismissal when he was terminated on the grounds that he was an alcoholic and his employer should have known that and that therefore it was not his fault. The grounds were whimsical, but the court, as then constituted, did not accept the argument.

“Whimsical excuses are not infrequently brought forward by workers’ representatives trying to get compensation for employees dismissed for cause. One classic example was when employees at a Jamaican Hotel cooked up a set of brownies laced with ganja which they proceeded to eat while at work, becoming visibly high in the process. Two were dismisses and did not contest the dismissal. Two did contest the dismissal and won their case on the grounds that there was no evidence presented in court. It had all been eaten up.

Courts since, however have been more precise in their definition of terms and less inclined to accept “whimsical” excuses.

The Court in Antigua wrote this Constructive dismissal definition which is standard in Courts and Tribunals in the Caribbean jurisdiction.

It is important to note that the definition is what is known as “conjunctive”, not “disjunctive” in that it specifies that “AND the employer committed the breach of a fundamental term in the employee’s contract.”

This underlies once again the importance of precise wording and construction of contracts in industrial relations field, whether they be individual contracts or collective agreements.